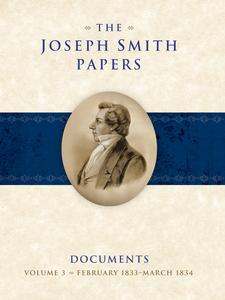 The third volume of the Documents series, published in 2014, contains minutes, revelations, letters, architectural and city plans, priesthood licenses, legal documents, and an effort to classify the scriptures by topic. Covering a time when opposition to Joseph Smith and his followers was intensifying in both Ohio and Missouri, this volume contains documents relating to the building of temples, the establishment of the city of Zion, the formation of the first high council, and the expulsion of the Saints from Jackson County, Missouri. This volume also includes documents that contain teachings distinctive to Latter-day Saint theology, such as the earliest known text of the “Word of Wisdom” and a revelation on the nature of Jesus Christ and humankind’s relationship to Deity. ISBN-13: 978-1-60907-987-1

Between February 1833 and March 1834, the religious movement Joseph Smith founded continued to develop as members of the Church of Christ immigrated to Ohio and Missouri from areas across the United States and Upper Canada. The collection of eighty-eight documents found in this third volume of the Documents series of The Joseph Smith Papers sheds light on the formative events of this period, as well as the challenges Joseph Smith faced as he sought to gather church members and establish a city of Zion in Missouri. Included in the volume are minutes, revelations, letters, architectural and city plans, priesthood licenses, legal documents, and an effort to classify the scriptures by topic.

During the period covered by this volume, both the administration and doctrine of the church developed and expanded, as demonstrated by the minutes of church meetings and by Joseph Smith’s revelations. The minutes of 17 February 1834, for example, describe the organization of a high council, a body of men responsible for aiding in church governance and administering church discipline. Marking another significant development in the church, a revelation dated 27 February 1833, later known as the “Word of Wisdom,” presented dietary guidelines to members of the church. Joseph Smith dictated another distinctive revelation on 6 May 1833, which explained the nature of Jesus Christ and humankind’s relationship to God.

As church members continued to migrate to Kirtland, Ohio, and Jackson County, Missouri, Joseph Smith became increasingly concerned with establishing the city of Zion. Several documents in this volume detail the church’s efforts to accommodate its growing numbers by purchasing and distributing land through the law of consecration. Joseph Smith and others also created plats for the city of Zion and plans for building houses of the Lord in both Kirtland and Jackson County. The first such documents to appear in a volume of The Joseph Smith Papers, these plats and architectural drawings demonstrate not only Joseph Smith’s vision of Zion but also his practical plan to develop a temple-centered community, where believers would prepare for the second coming of Jesus Christ.

In the midst of all this activity, the Church of Christ faced opposition in both Ohio and Missouri. In Kirtland, individuals sought to defame Joseph Smith’s character and the Book of Mormon, while in Missouri, large groups of Jackson County residents committed acts of violence against church members. The opposition culminated in the expulsion of about twelve hundred Saints from the county in November 1833. Some of the final documents in this volume describe Joseph Smith’s efforts to gather a force, known as the Camp of Israel, to help restore the expelled church members to their Missouri lands.

Accompanied by extensive historical annotation, the documents in this volume have been transcribed to the highest standards of documentary editing. Together, they illustrate the challenges Joseph Smith faced in leading a church that stretched across the country, as well as his unfolding vision of expanding the church and establishing Zion. Covering topics ranging from heavenly visitations to violent opposition, these documents provide a deeper understanding of Joseph Smith’s life and the religious movement he started.

“As has come to be expected, this volume includes cutting edge scholarship with exhaustive documentation. Future research and publications on the conflicts in Missouri and the plans for building Zion as well as the Kirtland Temple will greatly benefit from the insight and painstaking analysis from the editors of this volume.”

“I am taken with the excellent editorial work in these volumes, and I find no real weakness. . . . Joseph Smith’s History of the Church, edited by B. H. Roberts and first published over a century ago, was a remarkable achievement for its time and is still the documentary source most often cited in historical writings about the Church’s founding era. However, with the continuing publication of the Joseph Smith Papers, that should change. When this multivolume, multiseries project is complete, scholars interested in this era will be sadly amiss if they do not consult and cite it often. . . . These volumes [are] an absolutely essential resource for those who want to explore the life of Mormonism's founding prophet in detail. We eagerly look forward to all future volumes of the Documents series, which is the core of the project.”

“The third volume of The Joseph Smith Papers Documents series is a triumph of meticulous scholarship, which takes us through thirteen months of high significance in the history of the man and the church; letters, institutional minutes, and revelations carry the story forward from February 1833 through March 1834, across Ohio and Missouri, struggles within and without, and revelations, including the ‘Word of Wisdom’ on the use of alcohol, tobacco, and ‘hot drinks.’ The project’s high standards for documentary editing are complemented by maps, biographies, thorough historical introductions to the transcribed manuscripts, and stunningly detailed notes. This project remains the gold standard in the field of historical documentary editing.”