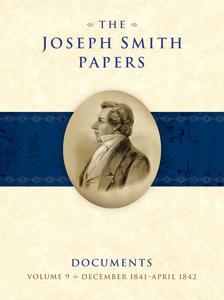 The ninth volume in the Documents series, published in September 2019, features over a hundred letters, revelations, meeting minutes, deeds, sermon accounts, and other documents from December 1841 through April 1842. They chronicle developments in the church, community, and Joseph Smith’s personal life during these important months in Nauvoo, Illinois. The rich documentary record from this period details the creation of the Relief Society, the establishment of a Freemason’s lodge in Nauvoo, and the opening of Joseph Smith’s store. This book offers a unique portrait of the breadth of Joseph Smith’s daily activities as he serves as a military leader and vice mayor of Nauvoo, becomes editor of the church’s newspaper, takes advantage of the nation’s new bankruptcy law, and continues to instruct Latter-day Saints near and far through discourses and correspondence. Readers will come away from this volume with an increased understanding of the prophet’s life and this pivotal period in the creation of the restored Church of Jesus Christ.

Alex D. Smith and Christian K. Heimburger are historians for the Church History Department, The Church of Jesus Christ of Latter-day Saints. Christopher James Blythe is a Research Associate at the Maxwell Institute’s Laura F. Willes Center for Book of Mormon Studies at Brigham Young University

The winter months of 1841–1842 were busy ones for Joseph Smith and other Latter-day Saints in the young city of Nauvoo, Illinois. Between December and April, Smith opened a new mercantile store for business, was elected vice mayor of the city, took over editorship of the Times and Seasons newspaper, became a Freemason, and helped create the Female Relief Society of Nauvoo. He also continued to command the city’s mili­tia, sell land to immigrating Saints, and lead the church.

The rich detail about Joseph Smith and church history captured in Documents, Volume 9 is possible because of a burgeoning of records created during the final years of the prophet’s life. New municipal and religious organizations, together with converts arriving at the church’s gathering place by the thou­sands, helped generate a wealth of correspondence, deeds, sermon accounts, meeting minutes, journals, and other documents. Consequently, a more com­plete view of Smith’s daily activities is available for this span of months than for any earlier period of his life.

As members of the Quorum of the Twelve Apostles returned from a proselytizing mission in Great Britain, church leadership began to take a more active role in controlling the church’s pub­lication efforts. A revelation instructed the Twelve to assume editorship of the Times and Seasons, the official communication organ of the church. By March 1842 the church purchased the printing establishment and Joseph Smith became the pa­per’s nominal editor with Wilford Woodruff and John Taylor working as editors and printers. The first issue of the paper edited by Smith included an article titled “Church History” that featured thirteen statements of belief later canonized as the church’s Articles of Faith. In the same issue, Smith began serial publication of another later-canonized text—the Book of Abraham, which he said he translated from ancient Egyptian papyri he had purchased in 1835.

Joseph Smith continued to transmit doctrine through revelation and his sermons, including discourses he presented to the newly organized Relief Society. Some of his instruction to this society helped prepare the Saints for the “endowment” ceremony that he unfolded to a small group of trusted church members in May 1842. Additionally, the quiet introduction of plural marriage led to misunderstanding and lack of awareness among some church members, result­ing in abuses related to the practice. Smith issued important correctives and warnings about these abuses in correspondence with and discourses to the Relief Society found herein.

During these months Joseph Smith and his contemporaries faced other challenges as well, in­cluding managing personal and church finances. Outstanding business debts from Ohio, more re­cent land purchases by the church in Illinois and Iowa Territory, and efforts to provide food and homes for vast numbers of impoverished immi­grants left Joseph Smith and others in desperate financial circumstances. In April, Smith was com­pelled to apply for bankruptcy.

Despite these challenges, the overarching narrative of these months is one of progress and growth. The documents in this volume depict the church founder’s myriad responsibilities and his role in building a community and a people. The texts presented here, with their detailed histori­cal annotation, make this volume an invaluable resource for students of the early history of The Church of Jesus Christ of Latter-day Saints.

Article from the Times and Seasons

“Our missionaries are going forth to different nations, and in Germany, Palestine, New Holland, the East Indies, and other places, the standard of truth has been erected: no unhallowed hand can stop the work from progressing, persecutions may rage, mobs may combine, armies may assemble, calumny may defame, but the truth of God will go forth boldly, nobly, and independent till it has penetrated every continent, visited every clime, swept every country, and sounded in every ear, till the purposes of God shall be accomplished and the great Jehovah shall say the work is done.”

Founding Minutes of the Female Relief Society of Nauvoo

“Prest. E[mma] Smith then arose and proceeded to make appropriate remarks on the object of the Society— its duties to others also its relative duties to each other Viz. to seek out and relieve the distressed— that each member should be ambitious to do good— that the members should deal frankly with each other— to watch over the morals— and be very careful of the character and reputation— of the members of the Institution &c.”

“Following the finest contemporary standards of documentary editing . . . volumes 7–9 of the Documents series cover Latter-day Saint history from the arrival of the Saints in Commerce, Illinois, in 1839 after their expulsion from Missouri until the end of April 1842—a period of three very eventful years. . . . This work is so incredibly comprehensive that context is as much the message of the JSP as content.”

“As with previous volumes of the Joseph Smith Papers Project, Documents Volume 9 offers a treasure-trove of primary sources for those interested in studying the history of the Church and the life of the Prophet.”

“As with all the volumes of the Joseph Smith Papers Project, this book should be considered for anyone interested in the history of the Church or the life of Joseph Smith. The documents selected for inclusion give greater insight into life in Nauvoo during this time period and help provide a better understanding of what Joseph Smith was like and what he taught...the thorough footnotes and historical information and explanations that are currently only available in the book make it well worth having.”