Nineteenth-Century Banking and the Financial Panic of 1837 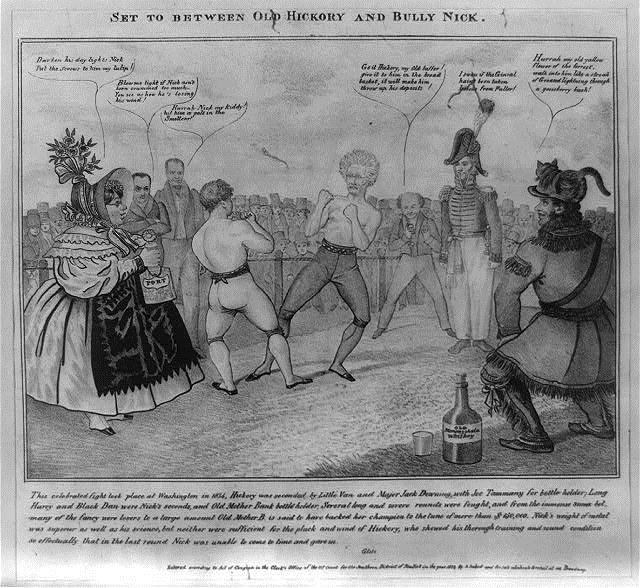 “Set to between Old Hickory and Bully Nick.” Political cartoon depicting the Bank War between President Andrew Jackson and Nicholas Biddle, president of the Bank of the United States. Image from www.loc.gov/pictures/item/2008661767. 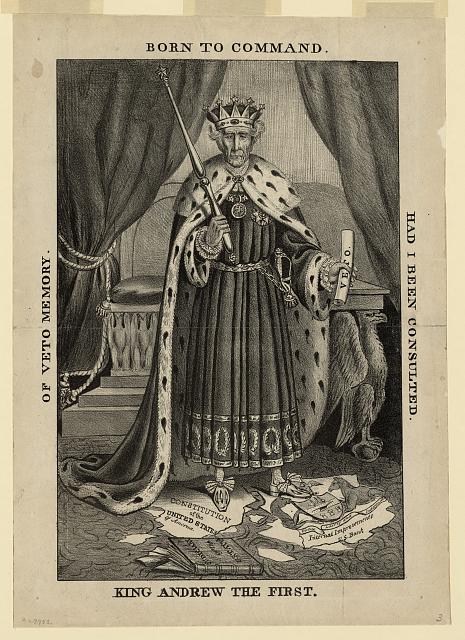 Ten-dollar bank note for the Second Bank of the United States. Image courtesy of ushistory.org.

In the fall of 1836, Joseph Smith, Sidney Rigdon, and other residents in Kirtland, Ohio, the majority of whom were members of the Church of the Latter Day Saints (known today as The Church of Jesus Christ of Latter-day Saints), began organizing a bank. They decided on a name—the Kirtland Safety Society Bank—and began selling stock in the bank in October. On 2 November, they drafted a constitution and elected officers. This constitution was printed in December 1836 as an “extra” to the church’s Kirtland newspaper, the Latter Day Saints’ Messenger and Advocate. An original of the constitution is available on The Joseph Smith Papers website.

The bank officers also took steps to petition the Ohio legislature for a charter. In this period, banks were regulated at the state level and only a state legislature could grant a bank a charter to operate. In order to have bank notes for their institution, the officers sent Oliver Cowdery to commission bank notes from the New York engraving firm of Underwood, Bald, Spencer & Hufty.

Have students examine the Kirtland Safety Society bank note above as well as other images of 1830s bank notes found at sites such as obsoletecurrency.blogspot.com and beastcoins.com/Banknotes/Obsolete/Obsolete.htm. Students may also find additional images online using search terms such as “obsolete bank notes” and “nineteenth-century U.S. bank notes.” Have the students consider the questions listed below.

Note: Many of the bank notes from the period that students will find in their searches will be associated with smaller communities rather than large cities. If you teach in an area that was a state or territory in the United States before 1860, consider having students search for obsolete bank notes from their state. Although a note dated in the 1830s is preferable, any note issued before the National Banking Act in 1863 will work. Students could also be given different states or regions of the country as their focus for this activity so a variety of bank notes are represented.

The 1830s: A Time of Expansion and Speculation

The 1830s were a time of substantial growth for the town of Kirtland, Ohio. While many Americans had decided to move west, a primary motive for those moving to Kirtland was religion. Missionaries of the Church of the Latter Day Saints had converted many people to their religion and often these converts moved to Kirtland to be near Joseph Smith and other church leaders. The population of members of the Church of the Latter Day Saints in Kirtland increased considerably over this period, rising from around 900 in 1835 to about 1,800 in 1837. This growth brought new craftsmen, new buildings, and other new ventures like stores. For those men who had been away preaching, the Kirtland they returned to looked significantly different from the one they had left. One returning missionary, Wilford Woodruff, recounted in his journal, “Two & a half years since I left Kirtland with my Brethren in their Poverty to go fourth to visit our brethren in tribulation in Zion then our Brethren in Kirtland were poor, despised, & even looked upon By the pomp of Babylon with Disdain & disgrace who stood waiting with eager eyes to behold them sink into forgetfulness. But how changed the scene now I behold a cheerfulness beaming upon every countenance that indicates Prosperity & the noise of the ax & the hammer & the sight of their walls & dwellings newly erected & their Bank & market.” (Wilford Woodruff, Journal, 25 Nov. 1836, CHL)

This growth and apparent prosperity, combined with the many stores that had been recently opened, allowed individuals greater access to store goods and credit to buy them immediately and pay for them later. Many people extended their credit beyond what they could afford by buying goods that were more luxury items than necessities. This was true not only of Kirtland residents but Americans more broadly. Frenchman Alexis de Tocqueville commented on the materialism and speculation he saw while visiting the United States, writing, “It is odd to watch with what feverish ardor the Americans pursue prosperity and how they are ever tormented by the shadowy suspicion that they may not have chosen the shortest route to get it. Americans cleave to the things of this world as if assured that they will never die, and yet are in such a rush to snatch any that come within their reach, as if expecting to stop living before they have relished them” (Alexis de Tocqueville, Democracy in America, trans. George Lawrence [New York: Harper & Row, 1988], 536). Many individuals felt they would be prosperous enough to repay the loans and credit they borrowed. They did not anticipate the dramatic economic reversals that would occur in early 1837. 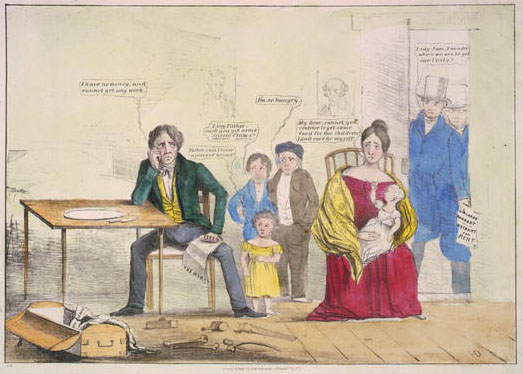 Because few records from the Kirtland Safety Society have survived, it is difficult to tell how the Panic of 1837 affected the society. Indications from the extant records suggest that the financial panic may not have directly impacted the society, but the Panic did create financial pressure and weaken the national economy, which brought additional stress to the underfunded Kirtland Safety Society and probably contributed to its closure. The society closed a few months after the May panic, by September 1837.

The Panic of 1837 affected all areas of the United States, but with varying intensity. With its predominantly agricultural economy, Ohio was less devastated than more developed urban centers, but the consequences of the Panic were still felt in Kirtland and other Ohio communities.

“The Times.” Political cartoon depicting the depressed American economy in 1837. Image from www.loc.gov/pictures/item/2008661304.

The following excerpt from an editorial written by Warren Cowdery, the editor of the Kirtland Messenger and Advocate, describes his perspective on the causes and consequences of the Panic of 1837:

But as we write for posterity as well as for our cotemporaries, we feel bound to notice some of the remote and proximate causes, and leave our readers to suggest the remedy. We are all sensible that one year ago our village was lively, and every countenance was lit up with a smile. The laborer found employ and fair wages. The farmer living near found a ready market for all his surplus produce. The mechanic constant employ for all the hands he could engage. A great amount of merchandise was purchased on credit, and sold in this town during the summer, fall, and winter past. Lumber and every kind of building material bore a high price; and much of it, as there was much used, was necessarily bought on a credit. Real estate rose from one to eight hundred per cent. and in many cases more. Men who were not thought worth fifty or an hundred dollars became purchasers to the amount of thousands. Notes, (some cash,) deeds, and mortgages passed and repassed, till all, or nearly all, vainly supposed they had become wealthy, or at least had acquired a competence. With the consciousness of having suddenly and without much effort enhanced the amount of his worldly fortune, every one thought he must clothe himself and family according to his circumstances & present prospects, he therefore made large bills with the merchants, and promised to pay in a few short months, or when the bank should open and begin to discount.

Time rolled on with its usual rapidity. All the necessaries of life rose in value, while the demand continued the same or rather increased, and the supply rather diminished. The time of payment on many large contracts had already come. The merchant, the mechanic, and the wholesale dealer began to call; the laborer who is ever worthy of his hire, began to feel the pressure. The effects of overtrading were visible, daily. Almost every man had given his notes for more than he could raise; contracts were expiring, where hundreds, yea, thousands were at stake. Some made exertions to extricate themselves by their own economy or the assistance of friends. Some sacrificed what they had paid, and gave up their contract. Some appeared to almost sink in despair, on viewing the prospect before them. While there were still another class, who reckless of all consequences, rushed blindly on, till ruin stared them full in the face.

This being a simple statement of facts, it is easy to see that overtrading is one of the principal remote causes of distress in our community. 2d. An inordinate desire to become suddenly and vastly rich. 3d. The deranged state of the money market abroad, and inflated paper circulation at home, together with every article of food rising nearly one hundred per cent. above the prices of last year. The laborer found less employ and still less pay, then formerly. The influx of inhabitants from abroad, in consequence of the general pressure, was less, and the few who did arrive felt little inclined to part with their disposable means. The day of speculation, we mean local speculation in real estate, appears to have gone by for the present, and the hour of adversity—the time of trial—has come; payments are due, money scarce, credit impaired, and confidence gone! We speak not of these, as calamities peculiar to our little town. We mention them because they are common to our whole country, and because causes of a similar nature have combined to produce nearly the same effect throughout our whole country. (Warren Cowdery, Editorial, Messenger and Advocate, June 1837, 3:521-522)