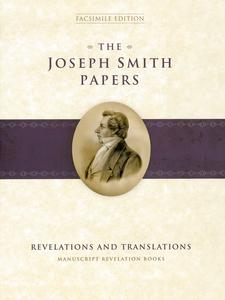 The first volume of the Revelations and Translations series, published in 2009, features two manuscript books into which many of Joseph Smith’s revelations were copied by early church scribes. These manuscript revelation books are among the most important documents owned by The Church of Jesus Christ of Latter-day Saints. They preserve the earliest known copies of most of Smith’s early revelations, and they are the key sources available for understanding the process of publishing the early revelations. The transcripts in this volume reproduce the original manuscripts of those books with great care, preserving corrections and revisions of any kind. Since several scribes penned revisions in the manuscripts, the handwriting of each scribe is rendered in a different color to facilitate analysis. This volume is an oversize facsimile edition (nine by twelve inches), featuring full-color photographic facsimiles of every page of the original documents on the left-hand page with the corresponding transcript on the right-hand page. ISBN-13: 978-1-57008-850-6

The earliest Latter-day Saint record-keeping efforts focused almost exclusively on new religious texts. Even before organizing a church in April 1830, Joseph Smith had dictated numerous revelations, or communications presented in the first-person voice of Deity, and had published the Book of Mormon, a work translated, he declared, “by the gift and power of God” from ancient gold plates. Other sacred texts soon followed. Early converts enthusiastically embraced these messages as authentic and as evidence that God had chosen Joseph Smith to usher in the last days, during which God would complete his work on the earth. Others dismissed the new texts as fraudulent or blasphemous. In both cases, the texts were lightning rods for attention, tangible real-world artifacts to which believers and detractors staked their claims.

This facsimile edition of Manuscript Revelation Books opens a new series of The Joseph Smith Papers that will provide transcripts of many of the earliest manuscripts of Joseph Smith’s written revelations and translations, together with reproductions of editions of these documents that were published during his lifetime. Though editorial introductions will place these documents in their historical settings, the focus in this series is on the texts themselves, the raw materials that scholars and others can use in studying the composition and history of these foundational documents.

The present volume features Revelation Book 1 and Revelation Book 2, two large manuscript books into which scores of early revelations were copied by early church leaders and scribes. Both are among the most important historical documents in the possession of The Church of Jesus Christ of Latter-day Saints. These books preserve the earliest known copies of many revelations, including a few texts that exist nowhere else. The copies of other revelations found herein, though not the earliest surviving copies, hold great value as alternative versions against which to compare when analyzing how carefully the texts were transmitted. Beyond this, because most of the texts in the manuscript books were edited and used as source texts when the revelations were published in the 1830s, the books are the most important sources available for understanding the process of publishing the early revelations.

Revelation Book 1, the spine of which is labeled “Book of Commandments and Revelations,” was begun less than a year after Joseph Smith organized the church. Though the volume was probably initially intended to be a record book for preserving revelation texts, it was later used as a copy text from which the revelations were published. Containing copies of more than one hundred revelations, it was the source text for multiple revelations published in the church’s first newspaper in 1832 and 1833 and in the canonical compilation titled A Book of Commandments (1833). Later, church officers assigned to publish the updated compilation known as the Doctrine and Covenants (1835) drew in part on Revelation Book 1 as a source text.

Revelation Book 2, which is titled “Book of Revelations” and has often been known as the Kirtland Revelation Book, was begun in early 1832. Containing about fifty copied revelations, this manuscript book was an important source text for the 1835 Doctrine and Covenants.

Designed for those who wish to carefully research the early texts of Joseph Smith’s revelations and efforts to publish them, the transcripts in this volume reproduce the original manuscripts of these books just as they appear today, preserving corrections and revisions of any kind, line and page breaks, and even the location of interlinear insertions. Since several scribes penned revisions in these manuscripts, the handwriting of each is rendered in a different color to facilitate analysis. A full-page photographic facsimile of each original page—the hallmark of a facsimile edition—allows comparison with the transcripts and provides detail that can never be fully captured in transcription.

Beyond their value as resources for careful study of the texts, the revelation books by their very existence demonstrate the importance that Joseph Smith and other early Latter-day Saints placed upon their sacred documents. These books affirm their commitment to create and preserve sacred texts, to document their dealings with God.

“This is a unique and momentous publication, done in a way unlikely to be duplicated. It is also one that every scholar seriously interested in the founding documents of the Church must inevitably examine.”

“When a guest lecturer at the J. Reuben Clark Law School, who is working on a documentary edition of papers by people involved in writing the Declaration of Independence, saw this volume, her reactions—which surely bespeak a typical first reaction—visibly exuded astonishment mingled with glee, together with expressions of sincere congratulations and longing admiration.”

“A particularly useful contribution of the editors is identifying the hands that contributed to the manuscript text. On the transcript pages, the work (sometimes only marks of punctuation) of Joseph Smith, Oliver Cowdery, William W. Phelps, Sidney Rigdon, and John Whitmer is distinguished by a different color of ink. This puts at the disposal of readers the expertise it took the editors hours to acquire becoming familiar not just with the singular shapes characteristic of the handwriting of each individual, but also with even the most minute, but important elements of an individual’s style.”

“The Joseph Smith Papers Project began working with [Revelation Book 1, which is labeled “Book of Commandments and Revelations”] in the middle of 2006. In that short period they have done a magnificent job. . . . I recommend this volume (with transcriptions) for the serious inquirer of Latter Day Saint scriptures. If there is just one book that you should own of the Joseph Smith Papers, this is the book.”

“It is hard to overstate the significance of [Revelations and Translations: Manuscript Revelation Books] to Mormon historiography. Editors have transformed these foundational records, much of them only recently discovered, into a vividly accessible volume that exceeds all documentary standards and reveals the process of Mormon revelation in stunning detail.”

“This new volume will allow each person [to] access . . . these revelations and see for themselves the changes that have been made. By seeing these pages of scripture in their early form the reader can have an informed understanding of this revelatory process. I highly recommend this book.”

“This may be the first time that many readers have a chance to examine, even second hand, a primary manuscript from the 19th century. At some point, many will probably test themselves at trying to read a few lines of manuscript before looking at the printed ‘cheat sheet.’ Depending on the chosen page, there will likely be some pride at how well the novice can read the unfamiliar handwriting, or—if the chosen page is one that is faded or particularly carelessly written—some marveling at the success of the volume editors in transcribing what seems an impossible mass of pale pen strokes.”

“The facsimile edition of this first volume in the Revelations and Translations series is a magnificent second volume in the long-awaited Joseph Smith Papers Project . . . The contents of this volume reflect scrupulous attention to the highest editorial standards, years of labor, and the considerable resources of Larry H. and Gail Miller that made it possible to assemble people with the necessary academic and professional skills. Revelations and Translations is a stunning volume.”

“This volume could signal a new era in Mormon history-telling, surely good news! . . . I treasure this newest volume so much. . . . [It] will stand tall as one of the most important and relevant releases from the Church’s press. . . . It’s worth grabbing this volume now and spending some quality time rediscovering the roots of your faith. If Karl Barth was correct, that Scripture was, in effect, a ‘divine-human encounter’ that morphs into a personal contact point for each of us individually, this book can come alive as evidence that early LDS revelation was, and still is, this same kind of encounter.”

“This volume should be helpful for scholars as well as anyone interested in church history or the production of modern scripture. Reading the revelations in the handwriting of those involved is a different experience from reading the typeset versions in our scriptures. I have found it to be a spiritual experience, which will lead me to treasure the book for more than just the educational interest it originally held for me.”

“This volume is a model of modern documentary editorial practices. Every conceivable device, including the color coding of editorial changes, has been used to establish accurate texts and to guide the reader through the complexities of the process employed by Joseph Smith and his associates to make available to the public the revelations which he believed he had received from God during the first years of his ministry. The editors have taken pains to present the subject matter with objectivity, with the result that the volume will be a valuable resource for non-Mormon scholars and readers as well as for Joseph Smith’s present followers and admirers.”

“This initial volume in the Revelations and Translations series comprises the actual manuscripts from which the Book of Commandments (1833) and the Doctrine and Covenants (1835) were first printed. These manuscripts, unobtrusively presented by skillful editors, take us back to the earliest surviving copies of Joseph Smith’s dictated revelations, complete with clearly represented refinements added by the prophet and his scribes. In certain respects this is analogous to our hypothetically gaining access to copies of first-century versions of the earliest biblical manuscripts. With the appearance of this new volume, serious students of the Mormon prophet and of Mormon scripture are more free than ever before to contemplate the development of the revelations’ composition and publication.”