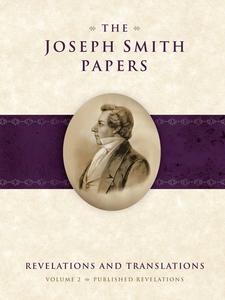 Volume 2 of the Revelations and Translations series, published in 2011, presents Joseph Smith’s revelations in the form that most early Latter-day Saints read and experienced them. The volume features high-quality photographs of each page of the Book of Commandments (1833), the first edition of the Doctrine and Covenants (1835), and seven additional texts added to the second edition of the Doctrine and Covenants (1844). The volume also includes transcripts of twenty-six revelation texts published in the church newspaper The Evening and the Morning Star and its later, reprinted version, Evening and Morning Star. Volume 2 also includes a proposed reconstruction of what likely would have been included in the final thirty-two pages of the Book of Commandments and selected photographs of a copy of the Book of Commandments marked up to prepare revelations for publication in the 1835 Doctrine and Covenants. Volume 2 goes hand in hand with the first volume in this series, and together they illuminate the process by which revelations were revised, edited, prepared for publication, and printed. The volume is the same size as Journals, Volume 1 (seven by ten inches) and is printed in three colors. ISBN-13: 978-1-60641-942-7

In November 1831, Joseph Smith and his associates in the leadership of the Church of Christ decided to publish Smith’s dictated revelations for the first time. Several score revelations, dating from as early as July 1828, would be printed in a volume to be called the Book of Commandments. When Oliver Cowdery, the highest-ranking officer in the church after Smith, asked a conference of elders to determine how many copies “it was the will of the Lord should be published in the first edition of that work,” the elders “voted that there be ten thousand copies struck.” For an organization less than two years old with a membership of just a few hundred, the decision appears overly ambitious, but Joseph Smith had already published five thousand copies of the Book of Mormon under even more modest circumstances. He understood that printing was essential both to preserve and to disseminate the sacred texts God had given him. To that point, the revelations had been available only in manuscript form to Smith’s closest associates, but with publication they could “go forth unto all flesh” as authorized by the revelation intended to end the book.

Revelations and Translations, Volume 2: Published Revelations features the Book of Commandments and the other major printed versions of Joseph Smith’s revelations that were published or in the process of being published during his lifetime. Reproduced herein as high-quality photographs are the Book of Commandments (1833); the first edition of the Doctrine and Covenants (1835), including the portion that has come to be known as the “Lectures on Faith”; and seven additional texts added to the second edition of the Doctrine and Covenants (1844). Reproduced herein as transcripts are twenty-six complete or partial revelation texts published in the church newspaper The Evening and the Morning Star (1832–1833) and its later, reprinted version, Evening and Morning Star (1835–1836). Because these newspaper versions were produced in connection with editing and typesetting work on the Book of Commandments and the 1835 Doctrine and Covenants, they are critical sources for understanding the textual history of the revelations.

This volume of The Joseph Smith Papers also includes two appendixes that provide important related material. The first is a proposed reconstruction of what likely would have been included in the final thirty-two pages of the Book of Commandments, had the print shop not been destroyed mid-run by vigilantes. The second presents selected photographs of a copy of the Book of Commandments owned by Oliver Cowdery and marked up to prepare revelations for publication in the 1835 Doctrine and Covenants.

Revelations and Translations, Volume 2 goes hand in hand with Manuscript Revelation Books, the first volume in this series. Manuscript Revelation Books presents the earliest surviving manuscripts of many of Joseph Smith’s revelations, the ones used by Smith and his associates in preparing the published scriptures of their day. Volume 2 presents the printed revelations in the form that most early Latter-day Saints read and experienced them. Together the two volumes make the early revelations more accessible than ever before.

“The introductions to this volume are first rate. The editors explain important developments that occurred with the publication of these revelations. . . . This kind of detail about the printing shows how much the editors appreciate the publication of these sacred books. . . . As with the facsimile edition [Revelations and Translations: Manuscript Revelation Books, Facsimile Edition], this volume is an essential tool in understanding the evolutionary process of Smith’s revelations. . . . Every student of Mormonism will be pleased with the work of the Joseph Smith Papers Project as they search this volume for a better understanding of how a modern-day prophet communed with his God and how the followers of this new religious movement sought to publish these revelations. I highly recommend this volume.”

“This volume gives good background information on the publication of the [Book of Commandments] and the 1835 D&C [Doctrine and Covenants]. The footnotes are usually informative. The value of the books is the detailed comments on the sources for printing the D&C. . . . It is refreshing to have scholars address [alterations in revelations] as evidenced from an examination of manuscripts and comparing the words between the printed revelations. . . . For those who love to examine the textual history of Restoration scriptures, volume two is a must to have in their library.”

“In Revelations and Translations, Volume 2: Published Revelations, the Joseph Smith Papers editors have not only maintained their very high standard of documentary excellence, but they have transformed the scholarly approach to Joseph Smith’s revelation. The revelation texts and other materials presented in this volume are a pillar that still stands, supporting the lived religion of millions. Documenting the construction of that pillar, and the mechanics involved, the editors deftly present their unparalleled familiarity with the source material. We will all benefit from the avenues of research now open.”

“The Joseph Smith Papers Project is engaged in scholarly work of the highest caliber—their documentary editing skills and presentation expertise are par excellence in Mormon academic circles. . . . The Joseph Smith Papers Project excels in challenging its readership to get their facts straight, to ground their narratives in historical documents, and to build a better foundation for understanding LDS history. The academic scholarship is vigorous, the research is thorough, and the presentation is attractive and inviting.”

—Ben P., “Where Heaven Meets Earth; Or, the Importance of the Joseph Smith Papers,” The Juvenile Instructor (blog), 27 Mar. 2011, http://www.juvenileinstructor.org/where-heaven-meets-earth-or-the-importance-of-the-joseph-smith-papers.

“While the two volumes of the Revelations and Translations series of the Joseph Smith Papers should intrigue anyone interested in Church history, those particularly interested in the textual history of the Doctrine and Covenants will find them an absolute treasure.”