Saints and Indians in Frontier America 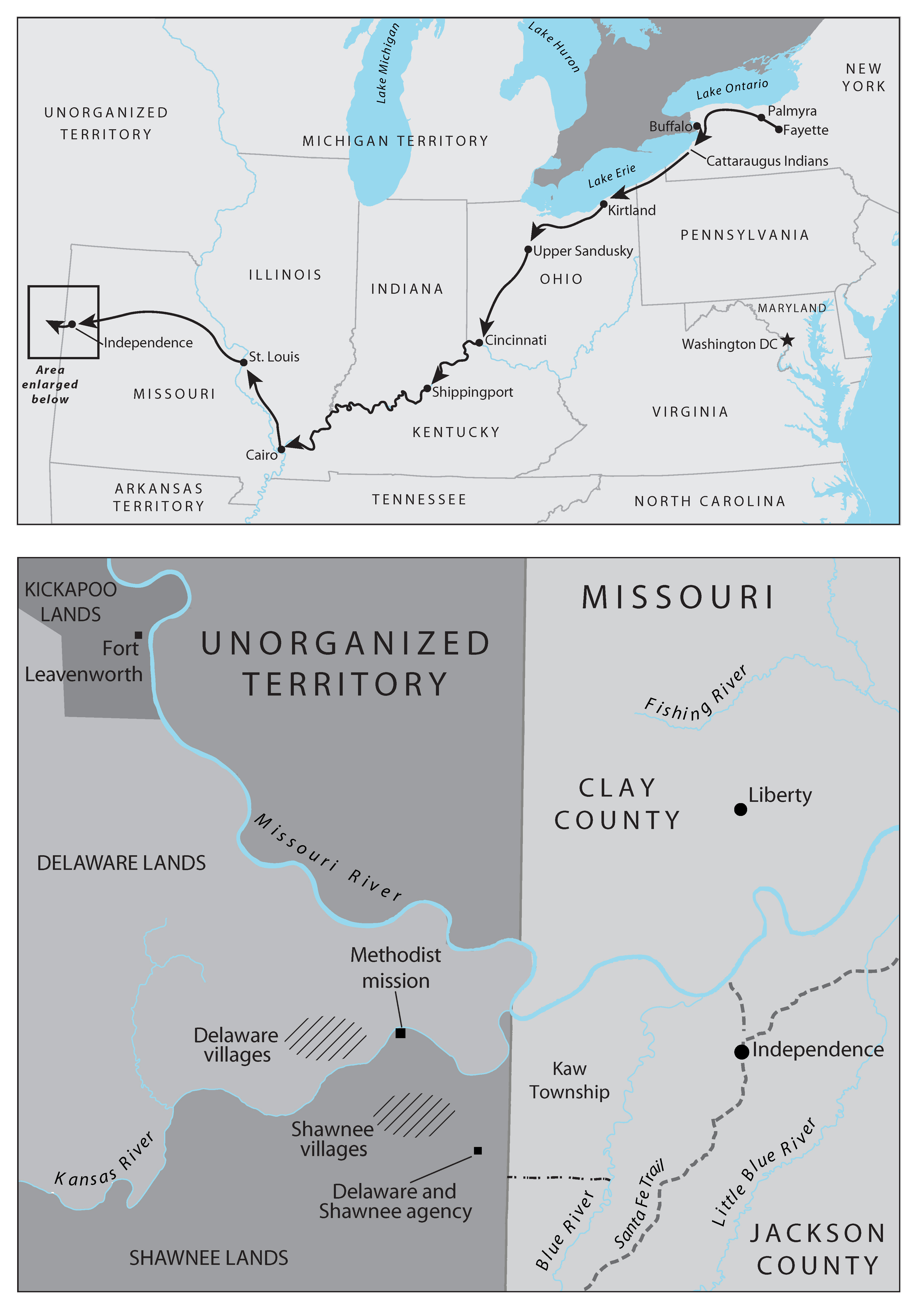 Mission to the Indians, 1830–1831. A group of missionaries from the new church preached to the Indians west of Missouri in early 1831, but they were soon ordered off Indian lands by a federal agent. They removed to Kaw Township in western Missouri and preached there while awaiting a formal license from the United States government to return to Indian lands. Despite their request, the license was never issued. (Design by John Hamer.)

From the assigned readings, what were some of the key elements of Latter-day Saint theology concerning the present state and future destiny of American Indians? How did these views influence proselytizing efforts among native peoples?

The Mormons, as I suppose from information, came here so ignorant of laws, regulating intercourse with the Indian tribes, that they expected to pass on into the Indian territory, procure lands of the Indians, aid them in adopting habits of civilization, and attach them to their party. At the Western line of Missouri, they were arrested by the proper authorities of government. Frustrated in this design, they located in this county, and procured land, to a small amount only, for so great a number of persons. The village of Independence was by them termed “Zion” in their public prints, and that was the Nucleus of the New Jerusalem. They have repeated, perhaps, hundreds of times, that this county was theirs, the Almighty had given it to them, and that they would assuredly have entire possession of it in a few years.— Reports believed by many to be true, but for the correctness of which I cannot vouch, say that they repeatedly declared that if the Almighty should not give it to them by any other miracle, it would be done by their sword—by blood, &c. However erroneous these reports might have been, such sayings appeared to the people very near akin, to many remarks which were common among them, and unfortunately for the Mormons, these reports were believed to be true, and the effect upon the public mind was accordingly.

The conflict between church members and the other settlers in Missouri erupted in July 1833 in violence against the Saints. After a mob destroyed the church’ printing press and tarred and feathered two men, Latter-day Saint leaders agreed, under duress, that all Saints would leave the county. McCoy described the tensions between the two groups that fall:

While the other citizens little apprehended it, the Mormons procured powder and lead and distributed it among them and also guns. In October, threatenings to throw down houses, to whip their leaders, and to apply tar and feathers increased. The Mormons bid defiance with increasing confidence, and threatened retaliation by shooting. About the last of October, matters upon both sides grew more and more alarming every moment. About this time they became strongly suspected of secretly tampering with the neighboring Indians, to induce them to aid them in the event of open hostility; for myself, I could not resist the belief that they had sought aid from the Indians though I have not ascertained that legal evidence of the fact could be obtained.

I yesterday received the following communication from a Mr. Hitchcock (a citizen of this county) which I would respectfully submit for your consideration. I have transcribed it from his own statement as follows— On or about the first day of April 1843, three Pottawattamie Chiefs called on me at Montrose in company with two mormons— I spoke to them in the Sauk language and discovered they were Pottawattamies— I enquired their business here, they replied, they had come to see the great man over the river (alluding to Joseph Smith the Mormon Prophet) and requested me to go over with them— I replied that I could not go— that Smith and I were not on terms of friendship and I had long been opposed to him. A Mormon then offered to take them across the river, and did so, about 9 or 10 oclock in the morning, about 2 oclock p.m. a messenger from Smith came to me and said the Prophet wanted to see me forthwith. I replied that he had long regarded me as an enemy, and I did not wish to go— at last I consented to go thinking they were plotting some mischief; accordingly I crossed the river and went immediately to Smith’s house, where I found the three chiefs waiting for me. I asked them if they had seen the “great man or British Officer” as they called him, they said they had— but he could not talk to them, and wanted me to interpret for them. One of the bystanders remarked, we would go in presently. A large crowd of Mormons were present all apparently deeply interested in the affair. Presently the house was opened and seats were provided for us, a larger portion of the mormons remaining outside by request of parties. As soon as I entered I was directed to my position on one side of the room with the Indians and Smith and his friends on the other. The talk then commenced as follows— One of the Chiefs enquired which of the two is the man that talks to the Great Spirit— I replied to him pointing to Joe Smith. He then wished me to say to him, he had come from the Kanzas river to see him and wanted to shake hands as friends— The Indians then shook hands with all present. Chief Apaquachawba said he had seen white men who informed him that Joe could talk to the G Spirit and he wanted him to advise them what to do, as the Indians were dissatisfied with the white people bordering on their lands; said the whites treated them badly— and wanted to know if Smith would give them any assistance in case of an outbreak on the frontier; that they had smoked the pipe with ten tribes who had agreed to defend each other to the last extremity— Smith replied, that he could give them no assistance, that his hands were tied by the U. S. but that he could sympathize with them. Smith then asked me if I was a friend to the Indians, I replied in the affirmative. He then advised them to stick to each other, to be friendly to the neighbouring tribes, and pray a great deal to the G Spirit. I then remarked to them that this man was not the proper person to come to for advise— that they should have consulted their agent on the Mo. [Missouri] river, that he would have seen that ample justice was done to them by the whites. They seemed dissatisfied with this, remarking he was an American Officer. I then refered them to the commanding officer at Fort Leavenworth and urged them to present their case to him. To this they made the same objection. I then advised them to visit the Govr. of Iowa, at which they seemed very indignant.

The Chiefs had full confidence that Joe Smith was in reality a British Officer, saying also that though they had been repeatedly informed this by the whites, and in proof of their assertion presented a large British Medal made of silver, representing a half moon with the image of a King’s Crown on one side. The Prophet examined it cautiously and pretended to understand the meaning of the inscription. The Indians insisted that Joe should send some of their Chiefs back with them; but he declined. The Indians became dissatisfied with me and thought I was not their friend— it being then late in the day I left them and returned home. The next morning the Indians met me at Montrose and informed me they had determined to go to Kansas river and consult a Half breed of their own tribe upon the subject— that they should return when corn was so high (pointing to the top of their leggins) when they intended to make some arrangements with the mormons to carry out their scheme— The Indians then left for their own country.

The above statement of facts Mr. H. is ready to make oath to, and subscribe it any time.

Since the above occurrence, the Indians and Half breed alluded to, have returned to Nauvoo agreeably to appointment, and it is said were accompanied as far as Ft. Raccoon on the Des Moine river by 100 of their own tribe.

What the result of this meeting has been I am unable to say, but it seems evident, from all I can learn, from leading men among the Mormons and from various other sources that a grand conspiracy is about being entered into between the Mormons and Indians to destroy all the white settlements on the frontier. The time fixed to carry this nefarious plot into execution is said to be about the ripening of Indian corn— This may all be rumour, but I have deemed it too serious a rumour to be trifled with, and have therefore taken the liberty of troubling you with a statement of facts, that in the event of an outbreak we may not be wholly unprepared.

With sentiments of the highest esteem

I have the honor to be dear Sir

your most obt servt.

Relations between the Saints and Indians 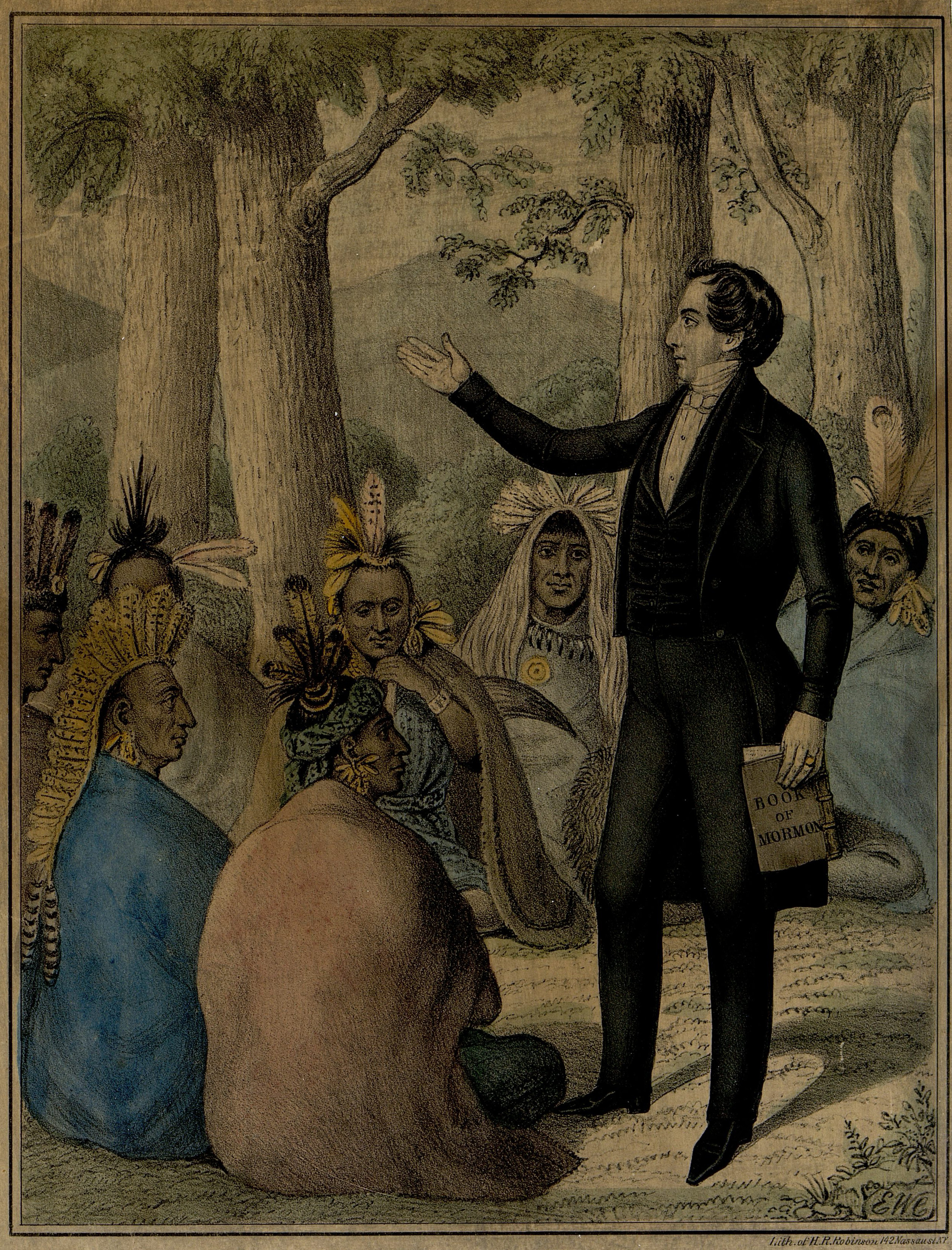 Ask students to summarize what they have learned. Have them discuss examples of how religion and theology interplayed with actual human-to-human relations. What role do native peoples play in these accounts? What goes unsaid, and what can be concluded from these omissions?