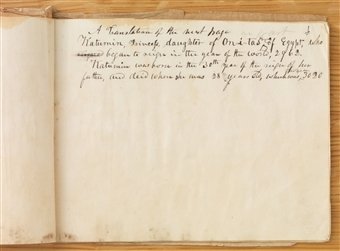 A Translation of the next page <​in part​>
4

TEXT: Insertion in graphite—possibly inscribed at the same time as the mathematical computations on the front cover.

Katumin, Princess, daughter of On=i=tas <​King​> of Egypt, who reigned
5

TEXT: Stricken and then partially wipe-erased.

[p. 1]
A Translation of the next page in part
Katumin, Princess, daughter of On=i=tas King of Egypt, who began to reign in the year of the world, 2962.
Katumin was born in the 30th year of the reign of her father, and died when she was 28 years old, which was the year 3020 [p. 1]
View entire transcript |
Cite this page