Revelations and Translations, Volume 5: Original Manuscript of the Book of Mormon 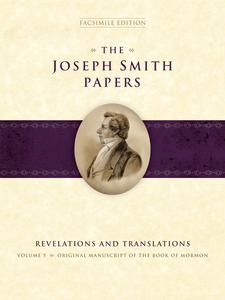 Volume 5 of the Revelations and Translations series, published in January 2022, presents all extant fragments of the original manuscript of the Book of Mormon. For the first time ever, researchers will have access to a photograph and color-coded transcript of each fragment of the manuscript, showing every change made and which scribe made it.

Royal Skousen is a professor of linguistics at Brigham Young University and editor of the Book of Mormon Critical Text Project. Robin Scott Jensen is a historian for the Church History Department, The Church of Jesus Christ of Latter-day Saints.

In 1841, Latter-day Saints in Nauvoo, Illinois, began work on the Nauvoo House, a boardinghouse whose construction had been mandated by revelation to Joseph Smith. On 2 October of that year, many Saints gathered on the lot near Joseph and Emma Smith’s home to lay the cornerstone of the structure. Joseph Smith placed several items into the cornerstone, including coins, printed copies of books of scripture, and—perhaps most consequentially—the original manuscript of the Book of Mormon.

The manuscript had been created more than a decade earlier. Joseph Smith dictated the text of the Book of Mormon to at least seven scribes and even inscribed roughly two lines of the extant text himself. The first portion of the manuscript, dictated between April and June 1828, was lost when Martin Harris, an early supporter of Joseph Smith’s work, took the pages home to show his family, and they were stolen. Joseph Smith later restarted the translation without reproducing the pages that had been lost, and by the time he finished about the first of July 1829, the manuscript contained roughly 488 pages.

Those pages were apparently in good condition when Joseph Smith placed them in the Nauvoo House cornerstone in 1841. The manuscript remained there for a little over forty years. In 1882, Lewis Bidamon, Emma Smith’s second husband, was renovating the Nauvoo House and opened the cornerstone. Despite earlier efforts to waterproof the cornerstone, the paper contents were found to be “mouldy and more or less decayed.” The Book of Mormon manuscript had been severely damaged by water.

This volume of The Joseph Smith Papers features what remains of the original manuscript of the Book of Mormon dictated by Joseph Smith. Of the nearly 500 pages that were placed in the Nauvoo House cornerstone, portions of 232 pages survive, amounting to roughly 28 percent of the text. Some of what remains is badly faded, obscured, or otherwise damaged. This volume presents photographic and typographic facsimiles of each Book of Mormon fragment that can be identified and placed among the other leaves or fragments; facsimiles of the fragments have been pieced back together as they would have appeared in the original manuscript. The transcripts and annotation in this volume rely upon years of earlier work by volume editor Royal Skousen as part of the Book of Mormon Critical Text Project.

Designed for those who wish to carefully research the earliest text of the Book of Mormon, the transcript in this volume reproduces the original text based on analysis of the manuscript in its present state, as well as of multispectral images and historical photographs. The transcript preserves corrections and revisions of any kind, line and page breaks, and even the locations of interlinear insertions. Since several scribes penned revisions in this manuscript, the handwriting of each is rendered in a different color to facilitate analysis. The photographs included here—the first complete photographic record ever published of what remains of the original manuscript—allow comparison with the transcript and provide detail that can never be fully captured in transcription. The comprehensive and careful presentation gives researchers unprecedented access to this essential text.

“Skousen and Jensen’s editorial work on these two facsimile volumes of the printer’s manuscript offer both scholars and lay readers alike wonderfully researched and beautifully executed volumes that make accessible each page of the handwritten manuscript that served as the source text for the earliest printed volumes of the Book of Mormon. . . . These two facsimile volumes stand as absolute models of what it means to be able to present with great scholarly precision manuscript pages in codex form. These types of scholarly volumes make such manuscript pages (with vitally informative marginal commentary) accessible to a wider readership, a readership that reaches far beyond the specialist scholars who most often have sole access to such delicate and treasured archival material. In this sense, facsimile editions such as these volumes are a move toward democratizing knowledge, and there are few textual projects that make this move as well as The Joseph Smith Papers.”