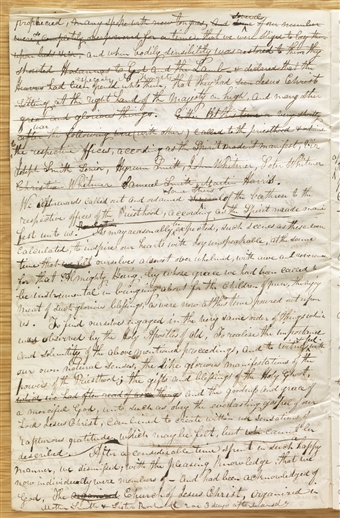 prophecied, many spoke with new tongues, and <​several​>
8

TEXT: “several” written over “some” and then canceled with the rest of the passage.

of our number were <​so​> completely overpowered for a time, that we were obliged to lay them upon beds &c &c, and when bodily sensibility was restored to them they shouted Hosannas to God and the Lamb— & declared that the Heavens had been opened unto them, <​especialy
N Knights [Newel Knight]

View Full Bio
​> that they had seen Jesus Christ sitting at the right hand of the Majesty on high, and many other great and glorious things. Either at this time or very shortly after<​war[d]​> the following were (with others) called to the priesthood & ordained <​to​> the respective offices, according as the Spirit made it manifest, viz
Joseph Smith Senior

View Full Bio
.
We afterwards called out and ordained Several <​some others​> of the brethren to the respective offices of the Priesthood, according as the Spirit made manifest unto us. <​Revelation​>
9

TEXT: Horizontal lines inserted here and after “cannot be described” separate the two enclosed sentences from the remainder of the text. This marked passage appears at a later point in Draft 2, where it was used to describe the June 1830 church conference.