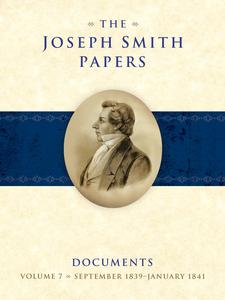 The seventh volume of the Documents series, published in April 2018, contains personal correspondence, discourses, minutes, a revelation, and a memorial to the United States Congress, among other documents. The volume shows Joseph Smith and the church endeavoring to establish another gathering place for the Saints. Specific topics addressed in these documents include the practical and spiritual building up of Nauvoo, Illinois; the struggle to obtain redress for the property and lives lost in Missouri; the missionary efforts of the Quorum of the Twelve Apostles in England; and the introduction of new teachings and doctrines, including baptism for the dead.

Just months after he escaped from state custody in Missouri and less than a year after church members were violently driven from the state, Joseph Smith and the Latter-day Saints gathered in October 1839 to officially designate the Commerce, Illinois, area as a center of gathering for the Saints. During the next fifteen months, Joseph Smith and the church focused their efforts on establishing the city that became known as Nauvoo, gaining restitution for the property lost in Missouri, and extending the church’s reach through missionary work.

Documents, Volume 7 begins with church leaders earnestly striving to settle the Commerce area. They created a plat for the planned town of Nauvoo and began selling town lots to the Saints. But as they progressed in establishing a Zion community, church members in the Commerce area suffered greatly from disease, particularly malaria.

Even in the midst of the Saints’ struggles on the marshy banks of the Mississippi River, Joseph Smith did not forget the difficulties church members had experienced in Missouri. In fall 1839, he spent much of his time preparing to travel to Washington DC to petition the federal government for redress for property church members lost when they were expelled from Missouri. While in Washington in late 1839 and early 1840, Joseph Smith and the rest of the church delegation sought aid from President Martin Van Buren and the United States Congress. They were ultimately unsuccessful, despite having submitted to Congress a lengthy memorial detailing the losses the Saints had suffered.

Although frustrated by the government’s refusal to grant redress to the Saints, Joseph Smith and the church continued their efforts to build up their community in Commerce and to strengthen the church throughout the world. Eight members of the Quorum of the Twelve Apostles were proselytizing in Great Britain, and two other apostles had been appointed to serve a mission to the Jews in Europe and Palestine. Throughout this period, church leaders deliberated about the best way to distribute more copies of church publications domestically and internationally. Many of the documents in Documents, Volume 7 showcase the determination and optimism that Smith and others felt about building up the church and its members.

Partly as a result of international missionary success, the population in Nauvoo and the surrounding area flourished, and the church and its community along the Mississippi continued to stabilize. In summer 1840, Joseph Smith announced that a temple would be built in Nauvoo and taught the doctrine of baptism for the dead for the first time. Before the end of the year, the Illinois legislature passed the Nauvoo city charter, granting the city extensive legal powers and protections and allowing for the establishment of the Nauvoo Legion and a university in Nauvoo. A January 1841 revelation to Joseph Smith highlighted efforts to build up the Saints’ new gathering place. In the ensuing years, the revelation functioned as a sort of sacred charter that guided the Saints’ efforts to establish Nauvoo as a “corner stone of Zion.”

The texts presented here, along with their extensive historical annotation, make this volume an invaluable resource for those studying this period of Mormon history and the church leader who strived to unify his people, obtain redress for the wrongs they suffered, and create a safe place for them to gather.

“What then we would respectfully ask, is the remedy for these violations of right in the persons & property of the Mormons? Shall they apply to the Legislature of the State of Missouri for redress? They have done so. They have petitioned, and their petitions have been treated with silence and contempt. Shall they apply to the Federal Courts in Missouri? They are not permitted to go there; and their juries would be made up of citizens of that state with all their prejudice against them. . . . For ourselves we see no redress, unless it be awarded by the Congress of the United States. And here we make our solemn, last appeal, as American citizens—as Christians—and as men.”

“Our principle location is at this place, Nauvoo (formerly Commerce) which is beautifully situated on the banks of the Mississippi, immediately above the lower rapids and is probably the best & most beautiful site for a city on the River. . . . The number of inhabitants are nearly three thousand & is fast increasing; if we are suffered to remain there is every prospect of its becoming one of the largest cities on the river if not in the western world.”

“Following the finest contemporary standards of documentary editing . . . volumes 7–9 of the Documents series cover Latter-day Saint history from the arrival of the Saints in Commerce, Illinois, in 1839 after their expulsion from Missouri until the end of April 1842—a period of three very eventful years. . . . This work is so incredibly comprehensive that context is as much the message of the JSP as content.”

“Simply put, [Documents, Volume 7] is a great achievement—well-researched and well-written. . . . Overall, this is one of the most important Documents volumes to be produced by the Joseph Smith Papers, and any scholar who studies religious history within Jacksonian America would do well to own it.”

“If the Joseph Smith papers were going to have a catchphrase, ‘Fantastic’ would be my number one choice. Each and every volume has been ‘Absolutely Fantastic!’ and Documents, Volume 7 is no exception. . . . In this Volume 7 you will read documents concerning the founding of Nauvoo including efforts to pass the Nauvoo Charter, Joseph Smith and Elias Higbee’s trip to Washington DC and their visits with Congress and Martin Van Buren as they attempted to get the federal government to intervene and give the saints restitution for their losses in Missouri, the arrival of John C. Bennett in Nauvoo and into the life of Joseph Smith, the reception of LDS Doctrine and Covenants 124, and other important events. . . . To call Volume 7 a great feast for historians and those interested in the life of Joseph Smith is not an exaggeration.”