Minutes and Discourses, 6–7 April 1844, as Published in Times and Seasons 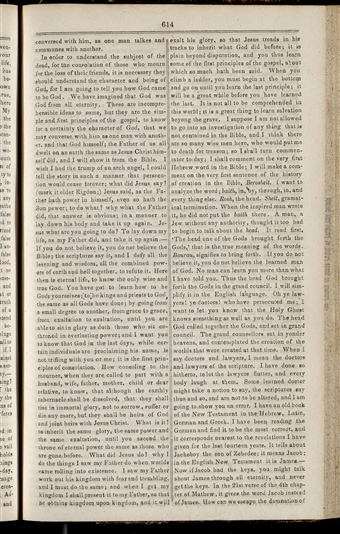 conversed with him, as one man talkes and communes with another.
In order to understand the subject of the dead, for the consolation of those who mourn for the loss of their friends, it is necessary they should understand the character and being of God, for I am going to tell you how God came to be God. We have imagined that God was God from all eternity. These are incomprehensible ideas to some, but they are the simple and first principles of the gospel, to know for a certainty the character of God, that we may converse with him as one man with another, and that God himself; the Father of us all dwelt on an earth the same as Jesus Christ himself did, and I will show it from the Bible. I wish I had the trump of an arch angel, I could tell the story in such a manner that persecution would cease forever; what did Jesus say? (mark it
elder [Sidney] Rigdon

View Full Bio
;) Jesus said, as the Father hath power in himself, even so hath the Son power; to do what? why what the Father did, that answer is obvious; in a manner to lay down his body and take it up again. Jesus what are you going to do? To lay down my life, as my Father did, and take it up again.— If you do not believe it, you do not believe the Bible; the scriptures say it, and I defy all the learning and wisdom, all the combined powers of earth and hell together, to refute it. Here then is eternal life, to know the only wise and true God. You have got to learn how to be Gods yourselves; to be kings and priests to God, the same as all Gods have done; by going from a small degree to another, from grace to grace, from exaltation to exaltation, until you are able to sit in glory as doth those who sit enthroned in everlasting power; and I want you to know that God in the last days, while certain individuals are proclaiming his name, is not trifling with you or me; it is the first principles of consolation. How consoling to the mourner, when they are called to part with a husband, wife, father, mother, child or dear relative, to know, that although the earthly tabernacle shall be dissolved, that they shall rise in immortal glory, not to sorrow, suffer or die any more, but they shall be heirs of God and joint heirs with Jesus Christ. What is it? to inherit the same glory, the same power and the same exaltation, until you ascend the throne of eternal power the same as those who are gone before. What did Jesus do? why I do the things I saw my Father do when worlds eame rolling into existence. I saw my Father work out his kingdom with fear and trembling, and I must do the same; and when I get my kingdom I shall present it to my Father, so that he obtains kingdom upon kingdom, and it will exalt his glory, so that Jesus treads in his tracks to inherit what God did before; it is plain beyond disputation, and you thus learn some of the first principles of the gospel, about which so much hath been said. When you climb a ladder, you must begin at the bottom and go on until you learn the last principle; it will be a great while before you have learned the last. It is not all to be comprehended in this world; it is a great thing to learn salvation beyong the grave. I suppose I am not allowed to go into an investigation of any thing that is not contained in the Bible, and I think there are so many wise men here, who would put me to death for treason; so I shall turn commentator to-day; I shall comment on the very first Hebrew word in the Bible; I will make a comment on the very first sentence of the history of creation in the Bible, Berosheit. I want to analyze the word; baith, in, by, through, in, and every thing else. Rosh, the head. Sheit, gramatical termination. When the inspired man wrote it, he did not put the baith there. A man, a Jew without any authority, thought it too bad to begin to talk abut the head. It read first, ‘The head one of the Gods brought forth the Gods,’ that is the true meaning of the words. Baurau, signifies to bring forth. If you do not believe it, you do not believe the learned man of God. No man can learn you more than what I have told you. Thus the head God brought forth the Gods in the grand council. I will simplify it in the English language. Oh ye lawyers! ye doctors! who have persecuted me; I want to let you know that the Holy Ghost knows something as well as you do. The head God called together the Gods, and set in grand council. The grand counsellors sat in yonder heavens, and contemplated the creation of the worlds that were created at that time. When I say doctors and lawyers, I mean the doctors and lawyers of the scripture. I have done so hitherto, to let the lawyers flutter, and every body laugh at them. Some learned doctor might take a notion to say, the scriptures say thus and so, and are not to be altered, and I am going to show you an error. I have an old book of the New Testament in the Hebrew, Latin, German and Greek. I have been reading the German and find it to be the most correct, and it corresponds nearest to the revelations I have given for the last fourteen years. It tells about Jachoboy the son of Zebedee; it means Jacob; in the English New Testament it is James.— Now if Jacob had the keys, you might talk about James through all eternity, and never get the keys. In the 21st verse of the 4th chapter of Mathew, it gives the word Jacob instead of James. How can we escape the damnation of [p. 614]
View entire transcript |
Cite this page