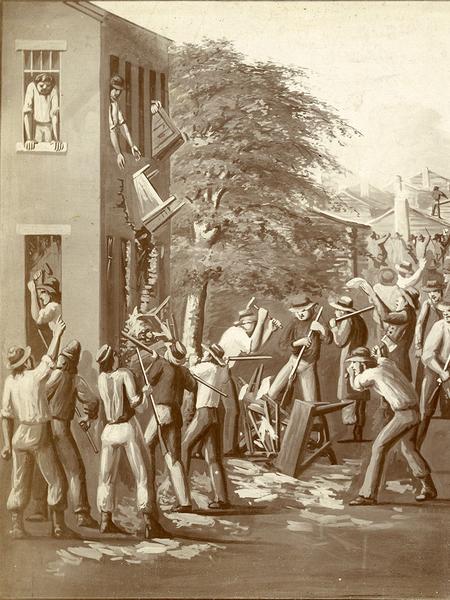 Destruction of printing office Oil on canvas, C. C. A. Christensen under the direction of Charles B. Hancock, circa 1882–1884. (Church History Library, Salt Lake City. Photograph by Rinehard and Co.; original not extant.)

One of longest rivers in North America, in excess of 3,000 miles.
1

Baldwin, Thomas, and J. Thomas. A New and Complete Gazetteer of the United States; Giving a Full and Comprehensive Review of the Present Condition, Industry, and Resources of the American Confederacy. . . . Philadelphia: Lippincott, Grambo and Co., 1854.

From headwaters in Montana to confluence with Mississippi River near St. Louis, Missouri River drains 580,000 square miles (about one-sixth of continental U.S.).
2

After dedicating temple site in Jackson Co., JS traveled on river by canoe, Aug. 1831, as he returned to Ohio.
5

During journey, JS dictated revelation cautioning Saints about dangers on water, after which some Saints finished journey by land rather than on river.
6

Important river landing located about three miles from courthouse in Independence, Missouri, at which point group of Saints arrived by steamboat from Ohio, July 1832.
7

After expulsion from Jackson Co., Nov. 1833, most Saints fled northward and crossed river to gain refuge in Clay Co.
8