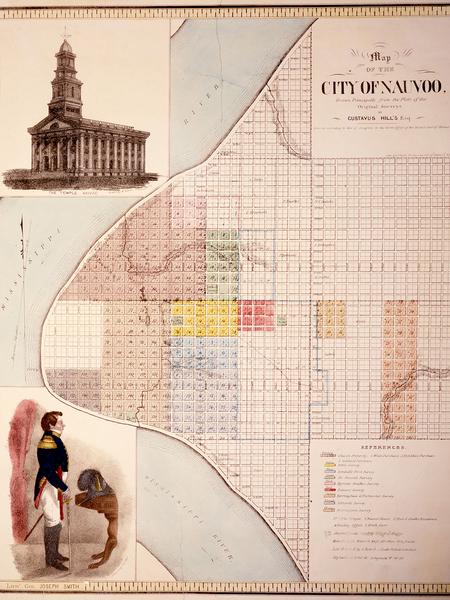 JS’s home, Nauvoo House, and JS’s brick store located in lower portion of Nauvoo (the flats) on nearly level ground along bank of Mississippi River, several feet above high-water mark and extending eastward about one mile.
5

After ascent, ground was level and continued into surrounding prairie.
7

JS often preached and attended meetings at groves near temple.
8

Baugh, Alexander L. “‘For This Ordinance Belongeth to My House’: The Practice of Baptism for the Dead Outside the Nauvoo Temple.” Mormon Historical Studies 3 (Spring 2002): 47–58.

Tension developed between Nauvoo Saints and neighbors in Hancock and surrounding counties.
15

Laws of the State of Illinois, Passed by the Fourteenth General Assembly, at Their Regular Session, Began and Held at Springfield, December 2nd, 1844. Springfield, IL: Walters and Weber, 1845.

Emma Smith and some Saints remained in Nauvoo.
19

Jenson, Encyclopedic History of the Church, 562.

Baldwin and Thomas, New and Complete Gazetteer of the United States, 762–763.

Baldwin, Thomas, and J. Thomas. A New and Complete Gazetteer of the United States; Giving a Full and Comprehensive Review of the Present Condition, Industry, and Resources of the American Confederacy. . . . Philadelphia: Lippincott, Grambo and Co., 1854.